skip to main | skip to sidebar

Each week in Lent we are reading a piece from an Anglican theologian or writer and discussing it.  The pieces are taken from Christipher Webber's book A Time to Turn.
If you want to discuss this week's piece come to one of the discussion sessions:
Sunday - 9:15 am; Tuesday - 6:15 pm; Thursday - 1:00 pm

A reading on sin from a sermon on John Donne on the text, “For my iniquities overwhelm me; like a heavy burden they are too much for me to bear”  (Psalm 38:4) 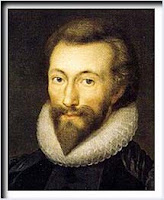 I cannot excuse my sins because of the example of my father, nor can I excuse them because of the times, or because of the ill disposition that rules society now, and do ill because everybody else does so.  To say there is a rot, therefore the sheep must perish, corruptions in religion have crept in and work in every corner and therefore God’s sheep, simple souls, must be content to admit the infection of this rot; that there is a murrain, and therefore cattle must die; superstition practiced in many places, and therefore the strong servants of God must come to sacrifice their obedience to it, or their blood for it.  There is no such rot, no such murrain, no such corruption of the times as can lay a necessity, or can afford an excuse to those who are corrupted with the times.  It is not such a peace as takes away honor that secures a nation, nor such a peace as takes away zeal that secures a conscience, so neither is it an observation of what others do or are inclined to do but what truth and integrity you decline from that needs to be considered.


It is not the sin of your father, not the sin of the times, not the sin of your own years, that you should say in your old age, in excuse of your covetousness, I have lived temperately, continently, all my life and therefore may be allowed one sin for my ease in my old age.  Or that you should say in your youth, I will retire in my old age and live contentedly then with a little, but now, how vain it would be to attempt to keep out the tide or quench the heat and impetuous violence of youth.  For if you think it enough to say, I have only lived as others have live, you will find some examples to die by also, and die as other old men and women, old in years and old in sins, have died also: negligently or fearfully, without any sense a tall, or all their sense turned into fearful apprehension and desperation.


They are not such sins as those of that age need to commit, nor such sins as those of your calling or your profession cannot avoid; so that you should say, I shall not be believed to understand my profession, as well as others, if I do not live by it as well as others do.  Is there no way to be a carpenter, except that after he has been made warm by the chips, and baked, and roasted by it, it is necessary to make an idol of the wood, and worship?  Is there no way to be a silversmith without needing to make shrines for Diana of the Ephesians as Demetrius did? No way to be a lawyer without serving the passion of the client?  No way to be a preacher without sowing pillows under great men’s elbows?  It is not the sin of your calling that oppresses you.  God has instituted callings for the conservation of order in general, not for the justification of disorders in any particular.  For those who justify their faults by their calling, have not yet received that calling from above, which is where they must be justified and sanctified on the way and glorified in the end.  There is no lawful calling in which you may not be honest.


You cannot excuse yourself by the unjust command of your superior; nor the ill example of your pastor, whose life counter-preaches his doctrine, for that shall aggravate his, but not excuse your sin; nor the influence of stars, or such a working of a necessary and inevitable and unconditioned decrees of God as may obstruct a religious walking in this life, or a happy resting in the life to come.  It is none of these, not the sin of your Father, not the sin of the present times, not the sin of your years and age nor of your calling, nor of the magistrate, nor of your pastor, nor of destiny, nor of decrees, but it is your sin, your own sin.


What is sin?  What are the sins we commit? How do we try to excuse our sin?


John Donne (1571 -1631) was an unsuccessful lawyer who was urged to seek ordination by the king and was made dean of St. Paul’s Cathedral.  Although he is better known today for his poetry, his sermons, prayers, and meditations are among the great monuments of the English language.
Posted by Vicki+ at 8:27 AM No comments:

Today is Ash Wednesday - the beginning of Lent.  As a part of the services today the priest says:


"I invite you therefore, in the name of the Church, to the observance of a holy Lent, by self-examination an drepentance; by prayer, fasting and self-denial; and by reading and mediation on God's holy Word.  And, to make a right beginning of repentance, and as a mark of our mortal nature, let us now kneel before the Lord, our maker and redeemer."


Repentance means to turn around - it is easy for us to follow things that catch our attention or that seem important and to suddenly realize that we have gone far from the place (or the person) we want to be.


We can use the days of Lent to stop, take a look around us, and decide if we are where and who we want to be and if not to repent, to turn around and to head back to where we really want to be.


"I invite you therefore, in the name of the Church, to the observance of a holy Lent,"﻿
Posted by Vicki+ at 5:50 AM No comments:

What were you expecting?

It's seemed like the every conversation the last few weeks has included the topic of the weather.  That is understandable - this is not what we expect for winter in Buffalo.

That got me thinking about expectations - what we expect, and how we react when things are different from our expectations.

Just food for thought as we wonder where the snow is this year.
Posted by Vicki+ at 6:59 AM No comments:

Vicki+
Clarence, New York
I've been an Episcopal priest since 1998. I've served as a rector and on the Diocesan staff in Southern Ohio and am now the rector of St. Paul's, Clarence, NY.